Review of Development and Change 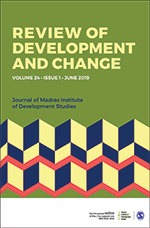 When Malcolm Adiseshiah founded the Madras Institute of Development Studies (MIDS) in 1971, one of his earliest activities was to start a monthly periodical which he named Bulletin: Madras Development Seminar Series. Its purpose was to bring the paper presented and discussed at the monthly seminar of the Institute to the attention of the wider public. Apart form the seminar paper, the Bulletin carried a long editorial section written by Adiseshiah himself on economic and development issues relating to Tamil Nadu and India with references to the changing profiles of the international economy as well. Soon the periodical came to be commonly referred to as the MIDS Bulletin. The wide coverage of current events and the range of articles in the Bulletin attracted the attention of scholars as well as the general public.

Malcolm Adiseshiah was the editor and the main contributor of the Bulletin. He faithfully brought out the periodical month after month for twenty four years. When he turned 84 in April 1994, he admitted that he was finding it difficult to carry the burden, but he was keen that a Journal on developmental issues be continued as an activity of the Institute. He persuaded one of his colleagues in the Institute to accept responsibility as the editor of a new Journal and announced in the June 1994 issue of the Bulletin that after it ceased publication in June 1995, a new journal would take its place.

Malcolm Adiseshiah passed away in November 1994. But as was his practice, he had compiled the material for the December issue and hence the December 1994 number appeared as the last issue of the Bulletin. Review of Development and Change is the successor to the Bulletin.